Excerpt: Whispers of the Sidhe (with audio)

As I steadily work my way to the end of this book, which turned out to be way harder to do, since I wanted Zoe to go one way and she was all, "F*ck this shit, I'm outtie" for eight months (you'd think I'd learn), I thought I would share this piece that I dreamt about the other night. Audio file at the end, if you want me to read it to you. 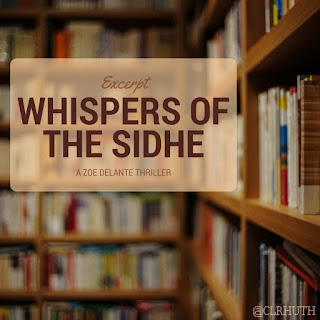 “I’m not important, Khellen.” I closed the book, drawing my finger against the worn leather edges. “It’s a faerie book. That’s what Heather said when she gave it to me, like an eclair with my coffee. She also said I might find it useful, but you know what? I can’t read it.
“I tried deciphering it like a mundane little human. I used to be good at puzzles, but nope, couldn’t make it out. So I poured my wolf, my death against it, and the pages remained the same, untouched by my presence, eternally blissful despite my existence.
“Like you.” I looked up at him, not caring that he could see the tears in my eyes. If I was going to hurt, then I was going to make him hurt, too, dammit.
He swallowed, that graceful bob of his Adam's apple, and wiped at the corner of his mouth with the pale length of his thumb, as if clearing the first thought away before speaking.
Not that I gave him the chance. “There are volumes of books, shelves of them, written about your people, your family, about you. Great stories that come with their own score, just by flipping the cover open. But no one is ever going to write about me. No one cares about this little monster girl with a broken heart who talks to dead people, when she’s not creating them.
“There’s no one out there rooting for my next love interest. No Team Sidhe. No Team Naga. No Team Zoe. Because nobody cares. So stop trying to convince me that I’m some suped up superhero. The cops don’t want me here. The sidhe doesn’t want me here. And the dead are getting louder in places they shouldn’t… be…”
“Zoe?”
I heard him, but I didn’t hear him, as the jaggedy puzzle pieces fell into their perfect spots along the edges of my psyche. The dead were dead, but cropping up among the living, during the day, in places where dead should not be. Or rather, the wrong dead were in the right places, and they’d all made enormous efforts to catch my attention. Full apparition in the middle of the day in a brick and mortar store? Yeah, they wanted me to know something.


Disappearing when a certain prince walked in? Yeah, that meant something, too.
I blinked back into his world. “Do the sidhe keep humans for pets?”
Posted by CL Roberts-Huth, Author at 10:57 PM No comments: