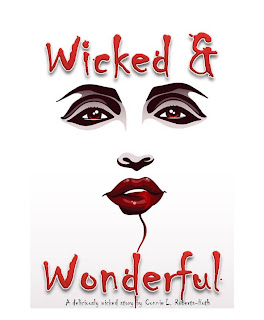 Always nice when the client realizes that her construction contractors were, well, more contractors than construction. Nicer still when they figure this out without freaking out because one of them had to use a magick or shifted or any other number of crazy but necessary things.

Mrs. Gonzalez had managed to do both. Not only had she figured it all out with the boys still standing on her front porch nor had she freaked out.
In fact, she had ushered them inside and served them an amazing tea with just a lingering hint of chocolate. And there she sat in her little rocking chair, a delicately crafted pink afghan draped across her lap, waiting for Zeke to continue what he had attempted on her porch.

She was right and wrong. They were not just there to check her plumbing, but the problem lay not in the poltergeist she had assumed was her dead husband, Manny.

“Are you certain?” she asked over the brim of her teacup.

Zeke looked over at Nate, who shook his head. “No ghosties, Zekie. No ghosties, just little crunchy munchy gnomes.”

The team lead turned his attention back to their client. “If there were ghosts, Mrs. Gonzalez, he would know. It’s what he does.”

“And the gnomes?” She set the cup down on its saucer and set the duo on the coffee table between them.

That was all the in Nate needed, and Milo leaned back in his chair, ready to be amused. “Yes, yes, the gnomes are here.” His restraint was evident in the rapid thumping of his fingers against the arm rests, the chaotic rhythmic tapping of his feet against the floorboards, but he was trying. “They live in the walls, and they like to move things. Do you have things being moved a lot? Like keys and cups and small things like that?”

He did not wait for an answer and waved away the opportunity. The other team members did not even attempt to dissuade him. There would be no point, and he would not hear them anyway. No, he was on a roll. Might as well let him just get it all out.

“They’re about this big,” he gestured about a foot and a half with his hands, “with the red conical hats and beards…well, just the men. The women would look silly with beards, don’t you think? But they do look nice with the hats, the women that is, though I only have second hand knowledge of that, as I’ve never seen one in real life.”

Vince cleared his throat and gave Nate a hard look. The albino paused, cringed, cleared his own throat and continued. “Anyway, they tend to live between the walls, and well, their living there can cause issues that could be construed as poltergeist in nature. Like lights flickering, television sets and kitchen appliances going on and off. Phone’s cutting out. That kind of stuff. And if allowed to carry on, they can disrupt the integrity of the house. Kinda like giant termites. With cone hats.”

Mrs. Gonzales smoothed the top of the afghan with both hands. “And these things, these gnomes, you can get rid of them? Without getting rid of Manny?”

Nate opened his mouth, but Zeke raised a hand to stop him. “Yes, ma’am, without getting rid of Manny.”

“Well, then…” She pulled the afghan off, folded it in half, and stood up, draping it across one forearm. “I guess I will go have a Corona with my
niece, Lilia.” She did not anything else as she crossed the living room. She paused for just a minute beside Milo and laid one hand on his shoulder.
“Keep going. She’s worth it.”

Gnomes were tidy creatures, as miniature horders go, but getting them out, getting them to relinquish their homes, well, that was rather messy business.

Nate was a sniffer. He found the nests, the hives, and pointed, sometimes literally so, as was the albino’s nutty way. It helped, Milo admitted, his antics, especially when they were neck deep in baddies and it looked as if that mission might be their last. Today, however, it was more an annoyance.

Being hypersensitive made touching supernatural creatures a big no-no for Nate. Their internal thought ran on a much higher frequency than normal humans, and it made his brain hurt. Big and bad enough, such contact could make his nose bleed. Increase the quantity, and well, they had had to carry him out of a minor wyvern’s layer in the Huachuca Mountains with blood seeping from every pore of his unconscious body.

No, the grabbing, snagging and tagging belonged to Victor. He had the strength for it, the speed. It was a perk of his lycanthropy. He was one of the first lycanthropes, first werewolf, Milo had met who did not consider his ‘condition’ a curse. Victor enjoyed the extras, found a way to curb the hunger and helping the rest of humanity was just icing.

Granted, it meant he could not work the three day full moon cycle--day before, day of, and the day after—but manhandling house gnomes, trolls and the occasional pissed off wyvern nest mate, he said it was a welcome trade-off. And he kind of liked having a magickal cold steel cage in his basement. The joys of working with a bunch of spell-happy magick-users.

What the werewolf snagged and tagged, Zeke nicely bagged into the silver-woven nets. Probably the most ‘normal’ of the supernaturals in the room, Zeke was a mage as well. Like Milo, yes, but in his own different way. It had been his guild who had offered Milo a place when there had been no elemental mage guild accepting applications in the state—the paranoid lot of them—and while he had been out of place among the trans-morphers, they had accepted him with open arms.

The nets spun from his fingertips, encasing each offending (and thoroughly offended) gnome in its own little ball. Each gnome ball became adhesive to another ball and only to the other balls. Maybe if they, as a whole, had gotten past their individual angst and worked together, maybe they could have made it off the coffee table. But gnomes were not much about teamwork when their little hats were stuck in silver skeins.

And well, if they had managed to come together, if they had gotten off the table, Milo’s transparent funnel of air kept them nicely in line. Easy enough work, and it did not require a sword or spear. He stayed clean, for the most part, cleaner than the troll at least, minus the occasional pouncing gnome that sought to save his or her kin. Grab, toss, net and toss…

“Score!” Zeke shouted, as one more silver bauble bounced off the air tube and landed none too gently atop the mountain.

Nate whooped and then screamed as a gnome growled and leapt from the nearest lamp shade. He raised an arm in defense and cowered. There was a yelp and a squeal, but not from the albino. Things softer than bone dripped from Vince’s clawed fingers into the space between Nate and werewolf. Milo watched the man’s eyes grow wide, the tremble of his lips, and he grabbed his arm and pulled him out of the shadow of Vince’s fist and all it contained.

“That was cool,” Nate whispered as Milo led him outside onto the porch.

And as the mage reached back into the house to drop the air tube for the other boys to dispose, Milo had to agree.